Ok just a short update on my thought on SPJ Airplay.

So last night I was on a stream discussion with Michael Koretzky and many others to discuss SPJ Airplay. A huge thank you to Oliver Campbell and John Smith for setting it up, to Michael Koretzky for his time and to all the other people that were on the stream and made some excellent points. It’s a serious slog at over 6 hours but if you fancy a listen it can be found here.
A while ago I wrote this twitlonger on why I was skeptical about Airplay, last night’s stream seemed a good opportunity to address some of the concerns that I had with Michael Koretzky. So the first point I made in the twitlonger was that Koretzky did not seem to be supported by the rest of the SPJ when it comes to talking about Gamergate. As far as that is concerned it has become clear as time has gone on and speakers/panelists have been announced that this is not the case. The SPJ are supporting Koretzky in this endeavor and they do indeed seem to be taking the whole thing very seriously. It still strikes me as odd that they were so afraid to talk about it in the first place but there you go, it’s a non issue now.
However, and those of you who listened to the stream won’t be surprised to hear this, I’m still skeptical about Airplay. Now I don’t want to be the one that’s negative about everything, I don’t want to be the grumpy old git at the party pointing out everything not quite right about it. After I wrote the first twitlonger people were very quick to jump on me, saying that Airplay would fix things in game journalism and that I don’t care about Gamergate. That’s ok, people are welcome to disagree with me. When I made the point that the SPJ as an organisation exists to support journalists, that journalists pay money to be it’s members, and that the SPJ was never going to vindicate Gamergate or declare them to be heroes. Koretzky agreed with me on this

One of the main reasons why people seemed to be upset and concerned by the latest Airplay update was that in it Koretzky said he didn’t care about some of the evidence being presented to him by supporters of Gamergate as far as harassment is concerned, a position that he defended on the stream saying that this evidence was irrelevant. However as the stream went on it became clear that there are still many aspects of Gamergate that Koretzky is unfamiliar with, such as the harassment patrol. Therefore I don’t see how Koretzky can be dismissing any evidence as irrelevant at this point. Like pieces in a puzzle the evidence may seem irrelevant now but may become so when Koretzky becomes more familiar with things, to dismiss things now seems premature to say the least.

If you all had condemned harassment, the journalism around GG would have been different.

As many pointed out on the stream, we’ve condemned harassment for the last ten months Koretzky. We’ve condemned it till we’re blue in the face. What difference did it make?  None whatsoever as to the way that Gamergate supporters have been portrayed by the media. The other point that I made is that Gamergate is a hashtag, not a group. The only behaviour supporters of Gamergate need to be responsible for is their own. I don’t need to condemn harasssment, unless anyone can find some instance of me harassing anyone it should be a given that I don’t support it. To use the analogy I used on stream, unless you see me out in the street kicking puppies you can take it as a given that I don’t support puppy kicking. Gamergate is still being treated as a group, with every member responsible for the actions of the whole. This while aGG is treated as individuals only responsible for their own words and deeds. This is unfair, all parties should be being treated the same and they’re not. I said as much on the stream and did not get a satisfactory answer.
As I said I don’t want to be the one ruining this for everyone else but Airplay needs someone to be critical, someone to ask questions. If that someone has to be me then so be it. I’m willing to take that role precisely because I DO care about Gamergate. I care that Gamergate gets their chance to discuss journalistic ethics, I care that Airplay is not merely Gamergate being put on trial and forced to defend itself as a guilty party. They say at the heart of every cynic lies a disappointed idealist, nothing would make me happier than for Airplay to be a huge success and fix things for everyone. But that will not happen, we will not be hailed as heroes, we may not even get the fair treatment we want. At best it will be an interesting exercise.
Oliver says that just because Koretzky is not a friend it does not make him an enemy. I say that journalists up until this point have proven themselves to be untrustworthy, and just because you cannot see the knife it doesn’t mean one isn’t there. 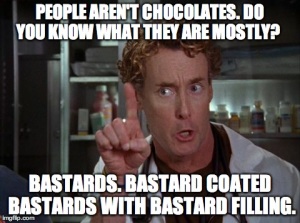 Thanks for reading
Angela

2 thoughts on “Thoughts Of A Feminist Gamer, Thoughts On #Gamergate and #SPJAirplay Part 2”